A downloadable game for Windows, macOS, and Linux

RePete is a 2D puzzle platformer about time travel and self-cooperation. You are Pete, a normal guy with abnormal abilities. Loop back in time and help your past self to collect gems and reach new heights!

RePete features four worlds, each introducing new gameplay elements, with over 60 challenging levels to test your ability to work with yourself. The demo version features the first two worlds so you can try before you buy!

RePete is also available on iOS devices. Check it out on the App Store and make time paradoxes on the go!

In order to download this game you must purchase it at or above the minimum price of $2 USD. Your purchase comes with a Steam key. You will get access to the following files:

I love your game, been playing it and it's pretty awesome so far, thank you so much for bringing it to Linux. I can't install it from the official Itch app, though. It can't find any executable.

Here's my review of RePete:

RePete is a nicely polished puzzle platform, with several interesting mechanics. The main mechanic is the ability to create a clone of Pete, the main character. The clone will help you jump further, access places you couldn't go before, and do other cool things. Currently, there are 4 worlds, with quite a large number of levels in total. Each world introduces a new mechanic of some type, such as force fields. The last thing I will mention about this game is the ease with which you can play on any number of different platforms. You can play on your phone (iOS or Android) and most of the major computer operating systems. I've been enjoying it on Ubuntu, and Windows so far. For 2dollars, or on sale, this is a bargain! The developer keeps updating, fixing bugs, and responds to the community. 5/5 game.

I'm unable to run the demo on Linux since it doesn't find the shared library liblove.so.0 on my system. I know Löve is a bit tricky to get working on Linux, but maybe the developer of Aerannis could point you in the right direction. He's got a distro agnostic version bundled with the dependencies and a launcher script that works fine. I tried using them to launch your demo, but wasn't able to because of a Löve version mismatch.

Thanks for your comments! What distro of Linux are you using? I've only tested RePete with Ubuntu, but I'm definitely willing to look into others as well.

I'm on Linux Mint 17 KDE. It probably worked for you because you had the dependencies available for building the package, but I think you'll find that it doesn't work on Ubuntu on a fresh install/different user session because liblove.so.0 isn't a standard library on any distro. Thanks for looking into Linux support. If you can't figure it out, I'll take a look at the documentation and see if there's anything I can do to help.

Thanks! You are correct, it appears that it only worked on my machine because I already had the dependencies. After investigating all morning, the only solution I can come up with is for you to run these commands first:

I'm open to suggestions about alternative approaches, but for now I might change the .deb so that it depends on love and will not allow the install until love is installed using the method above. Can you try it and let me know if that works?

That still results in the same issue, but gives me the love executable, and trying to launch the demo with it, I briefly get a window with a message saying that the version is incompatible, and then this error to terminal:

conf.lua:7: attempt to index field 'window' (a nil value)
This game was made for a version that is probably incompatible.
The game might still work, but it is not guaranteed.
Furthermore, this means one should not judge this game or the engine if not.

I ran ldd on demo-repete, which gave me:

So it looks like both the Lua and Löve needs to be packaged with it for it to work on my machine. I opened up the .deb to take a peek at your control file and it doesn't list any dependencies, so that needs to be fixed for it to work. That said, I think it might be easier to just make a tarball of the dependencies, the executable and a launcher script.

Thanks for trying. I've uploaded another .deb file, please try that and let me know if it works. I'm packaging the dependencies this time, so in theory it should work. I installed on a fresh install of Ubuntu and it worked, so hopefully it will work for you as well.

Thanks again for bringing this to my attention!

Played around 20 levels so far, the platforming is smooth, feels like a Rose & Time but easier to control since it's in 2D!

Awesome, I'm glad you like it! Hope you enjoy the third and fourth worlds especially; that's where the difficulty ramps up quite a bit. Thanks for playing! 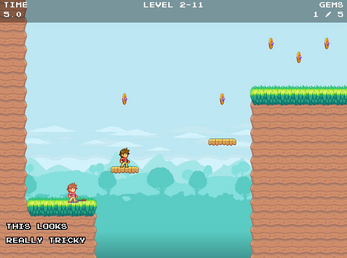 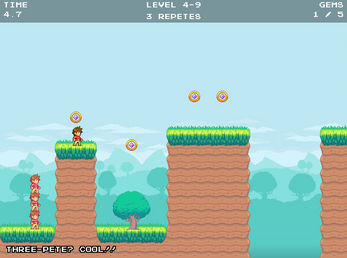 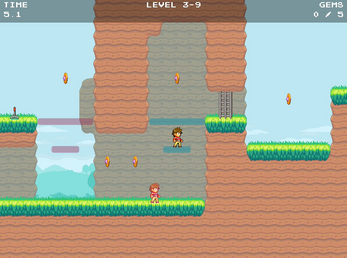 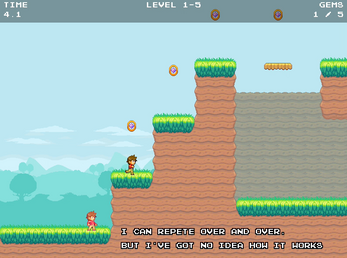